At present, he is a freelance musician as well as a teacher at the Department of Musicology at Palackeho University in Olomouc (Czechia) and elsewhere. He also acts as an independent researcher, publicist, composer, and arranger. Aside from the double bass, he also plays clarinet, folk flutes from Western Carpathians, small dulcimer (cimbalom), bagpipe, and other folk instruments from this region.

He has recorded more than 20 albums with outstanding musicians and producers: 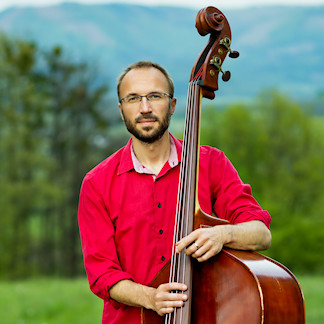 I have known Marian Friedl for almost 20 years as an outstanding musician and a friend of utmost personal and professional integrity. His musical talents are so unique that he is indeed widely considered to be one of the finest Czech musicians of his generation. For the last 15 years, he has been preparing live music performances for our freelance gatherings, spanning a number of musical genres, including jazz, swing, soul, avant-garde, folk, and even some classical and popular music — always played at the highest quality with an excellent band he hand-picked. I really can't praise Marian highly enough. If you're looking for a world-class musician, this is as high as you can get, you'll be positively shocked by his performance.

Robert Vlach business consultant and founder of Freelancing.eu
Disclaimer: This is a business presentation of Marian Friedl for informational and advertising purposes only. All rights reserved.